Ford The Rio Grande and Ride a Burro into Boquillas Del Carmen, Mexico!

July 06, 2019
Epic Family Fun on The Border
by Josh Holloway 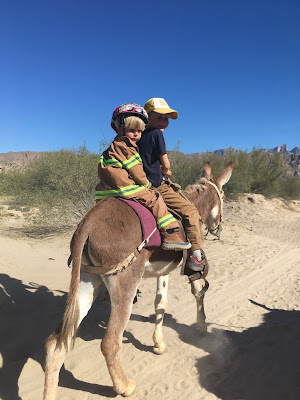 We stood there, my wife Heidi, our 3 young sons, and I, in front of a camera a few hundred yards from Mexico, attempting to re-enter the United States. Heidi looked puzzled, holding the handset to her ear at the U.S. border entry point in Big Bend, National Park. A Customs and Immigration agent was on the other end of the line, over 300 miles away, in El Paso. “What’s the look about,” I wondered.

Mexico was an opportunity that popped out of the desert expanse, as our family of five circumnavigated the U.S. by minivan. We were obtaining our backcountry camping permit, and debating the 4X4 capabilities of our Honda Odyssey with the Big Bend park ranger, when Heidi spotted Boquillas del Carmen, Mexico, just across the Rio Grande on the park map.
“Can we just go there?” she inquired.
“Well, the border’ll be open till five o’clock. Once it closes it’s closed until Wednesday,” the ranger responded.
Okay, so today was Sunday, meaning don’t dance the Salsa one too many times, Cinderella!
“Time’s wasting, everyone make for the minivan!” Heidi commanded.

The trip from the visitor center to the border, down the parched stretch of park road was straight forward, but that was were the “normal” border crossing ended. We parked, made sure we had some water, a bit of cash, and our passports in my backpack, and meandered through a small border patrol building, and onto a dirt path. The path lead down to the mighty Rio Grande River, which though wide, looked to be about knee deep. Heidi and I looked at each other. It was decision time— like right out of one of my older boys’ favorite “Choose Your Own Adventure” books. Do we get in the small row boat attended by the Mexican man waiting on the bank for $5 a head, or do we attempt to ford the muddy river? Five dollars times five people is a lot for our Gypsy travel style that has us exploring full time by land and sea for under $40 a day... A quick, responsible decision was made. Heidi would take the three boys, Kai (age 11), Cove (age 8), and Zev (age 4) in the aluminum row boat, while I braved the river, in true pioneer fashion.

At the water’s edge I took off my shoes and socks, rolled up my pants, and commenced wading. The bottom was pebbly and it was easy going to mid-river— which we were informed was the U.S./Mexico boundary. The river was about to my thighs now, and I became aware of the dozens of eyes peering at me from the opposite bank. At this point Heidi and the boys were already across, also peering back at me. I picked up my pace for the spectators, but as I reached the opposite bank, a gooey sludge began squeezing up through my spread toes, and around my feet and ankles. The mistake was obvious. There was rocky shore to the right, but in front of me, leading into the water, was a foul looking mixture of dirt and donkey manure. Uhggg! It had me in a suction hold. I immediately began picturing the little parasitic worms, as they pierced the soft soles of my feet and made their way into my bloodstream, destined to eat me from the inside out, starting with my liver. On my gravestone would be the words, “He Saved Five Bucks!”

I looked up the river bank, and noticed a stocky man in a big cowboy hat motioning me towards the rocks. Backtracking through the goo, and making my way upstream, I gained access to the rocky shore.

With the Rio Grande behind us, we were now in Mexico. There to greet us were about thirty burros, a couple of dusty, workhorse pickups, and fifteen caballeros (cowboys). It was time for choice two in our family’s Mexican adventure.

The town of Boquillas was somewhere beyond the mesquite. Having done no research we could only guess at distances. There was another couple that had come across just before us. They were promptly whisked away in the back of a pickup, enveloped in a cloud of dust.

The caballeros closed in. “You ride truck?” asked a man approaching us from the side where the trucks were parked.
“No gracias,” I replied, valuing the respiratory health of my offspring.
“You ride burros?” asked a young man, pulling a donkey towards us.
Donkeys, how novel! “¿Cuanto cuesta?”
“Five dollars each,” he replied in plain English.
Heidi, with visions of our boys riding into town on their tiny steeds, sprang into bargaining action.
“Dos burros, para los tres hijos.”
The caballeros pondered the idea. Two donkeys, three riders, $10. They shrugged, put our oldest on one burro, and our middle and youngest on another, took our money, and gave the donkeys a light swat on the rump.  The burros were off, with Heidi and I trailing on foot. We looked back at the caballeros standing around, while our boys rode off.
Heidi had a quizzical look. “Do they think we know what we’re doing with these things?”
“Dunno. Just hope the burros know the way, Heid.”

“Yaaaa, Yaaaa!” Kai called out to his burro, trying to keep his donkey length lead. “Do you think if I lived here I’d have my own burro?

Cove was holding the reins and laughing hysterically, his little brother perched behind him smiling ear to ear in his usual full fireman attire.

There was a fork in the road with two equally worn paths? Not to fear, these brilliant burros took the left without hesitation. The animals trudged along, as Heidi and I snapped photo after photo, and rated our investment as the best $10 experience ever.

As we basked in the moment, the lead donkey suddenly stopped. A split second later Cove and Zev’s donkey rammed nose first into the leader’s rump. Both donkeys stood motionless with blank stares.

“Yaaa, Yaaa!” Kai called, flopping his feet and flicking the reins.
Nothing...
“What now?” Heidi asked me.
“I got this,” I assured her, as I took the reins for the lead burro in my hand, and attempted to pull the big lug forward. But as I leaned into the reins, I could see where they connected to a metal bar that was scraping between the beasts teeth. Feeling barbaric, I stopped.
Were these not Mexican burros? Here was my chance to sweet talk them with every command verb in my Spanish vocabulary. “¡Vaya! Venga! ¡Anda le! ¡Corre! ¡Adelante! ¡Haga lo! ¡Ariba!”
Nothing...
“You’re very persuasive,” my wife chuckled, while videoing my Spanish utterances, accompanied by gesticulations in the onward direction.

Sizing me up, the lead burro suddenly had a new plan. These Gringos were obviously on the wrong side of the Rio Grande. He turned around, and along with the other burro began to carry our children back to the USA.

Springing into action, I wrangled the lead mutineer to a halt, but as I went to stop the other burro, the leader began marching again. It would take two people to stop both animals, but my wife appeared incapacitated. In fact, she was convulsing with laughter, tears streaming down her face.

Close to resigning myself to an absurdly brief trip to Mexico, hope came towards us from around the bend. A middle aged caballero was leading a group of burros, each with a tourist adorning its back. He’d get us heading in the proper direction!

As they approached we exchanged greetings of “¡Hola, buenos días!” He smiled broadly, and waved to the tiny bombero (Fireman Zev in his turnout gear). However, in the exchange of niceties, I failed to convey our predicament, and the caballero continued on his way to Boquillas, clicking his burros forward.

What I had missed in passing, my boys had taken to in earnest, as they made a clicking sound with their mouths. I tried to mouth the sound, but my 43 year old tongue struggled to produce something audible.

The lead burro, which I had forcibly turned around, fully understood Kai’s tongue-to-roof-of-mouth clicking command to “GIDDY UP!”, and began plodding in the proper direction! I ran quickly to get burro number two following, while my other boys clicked away.

We made our way into town, tied our burros to a scrubby tree with long branches that served as a burro parking lot, and began walking up the dirt road, which was Main Street. In the front yard of the first home we passed, embroidered on a white cloth, and hanging from a piece of line strung between two trees, were the two simple words, “No Wall.” As we continued on we saw the tiny grocery store, the two restaurants, a bar, the school, and more signs with those same words, “No Wall.”

The stakes are high for this tiny, Mexican, frontier village, just across the Rio Grande. The nearly 200 residents rely heavily on tourism out of Big Bend National Park. In May of 2002, after the events of September 11, 2001, the border was closed by the United States government. The impact on Boquillas was devastating, and about half the residents left. On April 10, 2013 the border reopened, and the town has rebounded.

As we left Boquillas and made our way back to the border crossing there was a lot of discussion.
“They really like firemen here,” Zev observed.
Indeed they do, probably owing to the fact that Los Diablos, a highly respected, emergency fire crew of 32 Mexican nationals employed by the U.S. government, operates out of Boquillas, and works alongside Big Bend’s firefighters.

“Do you think we’ll still be able to go to Mexico from Big Bend if there is a wall?” Kai asked.
“Where would they put a wall Kai? In the middle of the river?” replied Cove.

There were plenty of unanswered questions going through our heads as we cleared back into the United States. I scanned our passports and fidgeted awkwardly in front of the camera, which was coated with a mirror surface, and which I couldn’t stop staring at. Heidi talked with El Paso on the handset. But presently she wasn’t talking, she was just standing there, an unidentifiable expression on her face. Heidi shrugged, took the handset from her ear, and handed it to our four year old.
“What’s up, Heid?” I asked.
“The official couldn’t control himself. He was laughing the whole time I talked to him,” she replied. “Finally said he needed to speak with the fireman!”

Popular posts from this blog

Tiny Bubbles -- the prelude to adventureswithboy123

April 06, 2017
Prior to becoming adventureswithboy123, Heidi and I took off on a 3 year barebones tour of the Pacific aboard our small but sturdy, engineless Pacific Seacraft named "Tiny Bubbles." The following documents those crazy days...


From: Tiny bubbles
Date: 01/02/2006 11:51:00 PM EST
Tiny Bubbles in Oz
We haven't entirely adjusted to all the western comforts to be found here, but we're working on it. Australia has been good to us for the most part. We sailed to Bundaberg on the east coast as our Customs check-in port and arrived on Thanksgiving Day. Of course Aussies don't celebrate Thanksgiving so it didn't amount to much, but we thought it was neat. We entered Port in the dead of night using the well marked, but narrow channel lights as guides. We had to sail up to a dock in order for customs and quarantine to board and clear us. We had heard rumors that Australian quarantine confiscates all your food, so we had been eating ourselves silly trying to clean out our …
Read more

A Tour Down Below Aboard Tiny Bubbles II 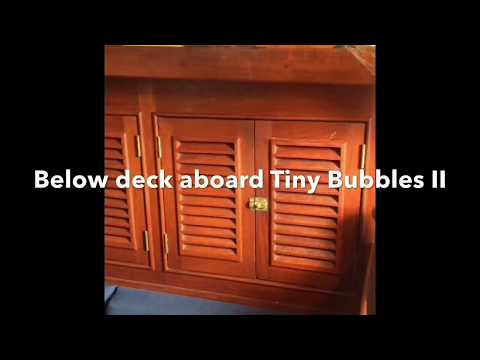